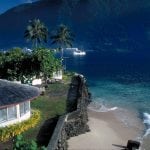 Samoa is a small island country in the Oceania.  The country operates a parliamentary democracy system of government.  There are two official languages: Samoan (of Polynesian) and English. There are so many amazing facts about Samoa you haven't heard of. The religion of Samoa is mainly Christian.  Some 98% of the population is in one denomination Christianity or the other.  … END_OF_DOCUMENT_TOKEN_TO_BE_REPLACED