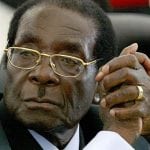 Zimbabwean President, Robert Mugabe has alleged that his former vice-president and other top officials in his ruling Zanu-PF sought the services of Nigerian witch doctors in a bid to kill him. The Africa Review reported that President Mugabe made the bizarre claims at the weekend as he celebrated his 91st birthday at a lavish party hosted by the party’s communist-styled 21st … END_OF_DOCUMENT_TOKEN_TO_BE_REPLACED 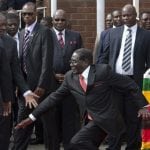 Robert Mugabe has suspended no fewer than 27 bodyguards for failing to stop his embarrassing fall down podium steps, sources have claimed. The 90-year-old Zimbabwe President was caught on camera taking a tumble after addressing supporters at Harare Airport last week. His security team scrambled to help him to his feet and desperately tried to brush over it by purportedly … END_OF_DOCUMENT_TOKEN_TO_BE_REPLACED 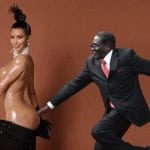 Newly elected AU chairman and Zimbabwe President Robert Mugabe, 90, fell down steps from a podium after speaking to supporters upon his return from Ethiopia on wednesday Febuary 4, 2015. There are report that the Zimbabwe Government has ordered that the pictures of Mugabe falling down be deleted in the internet and he responded with hilarious memes on the internet. We bring … END_OF_DOCUMENT_TOKEN_TO_BE_REPLACED

Zimbabwe President Robert Mugabe, 90, fell down steps from a podium after speaking to supporters upon his return from Ethiopia, say witnesses. Mugabe appeared to miss a step and toppled when he left the raised lectern at the airport Wednesday afternoon, according to several witnesses, who insisted on anonymity because of security concerns. His aides quickly helped him up and … END_OF_DOCUMENT_TOKEN_TO_BE_REPLACED 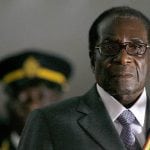 Ninety-year-old Zimbabwe President Robert Mugabe, one of Africa's most divisive figures, ascended to the rotating chairmanship of the African Union on Friday. Mr. Mugabe, the only leader Zimbabwe has known since independence from Britain in 1980, assumed the largely ceremonial role at an African Union summit in the Ethiopian capital, Addis Ababa. "By electing me to preside … END_OF_DOCUMENT_TOKEN_TO_BE_REPLACED