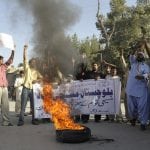 Hardcore Islamic groups in Pakistan are protesting the right to murder their wives and daughters if need arise after the Pakistani government introduced the Protection of Women Against Violence Bill. The group attempted to block the legislation, saying it would “destroy the family system in Pakistan” and “add to the miseries of women”. Wives and daughters are often still … END_OF_DOCUMENT_TOKEN_TO_BE_REPLACED 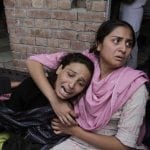 More than 50 people have been killed and several injured after a suicide bomber detonate a bomb in a public park in the eastern city of Lahore on Sunday. It is speculated that the suicide bomber targeted Christians celebrating Easter in the park and most of the dead and injured are women and children. Bodies were lined up by the side of a fairground ride after the tragic … END_OF_DOCUMENT_TOKEN_TO_BE_REPLACED

Two ambassadors to Pakistan were among six people killed when a military helicopter crashed into a school in the country’s mountainous north on Friday, the country’s army said. The two pilots of the MI-17 transport helicopter were also killed in the crash, which took place as the foreign dignitaries were being ferried to the inauguration of a project that was to be presided … END_OF_DOCUMENT_TOKEN_TO_BE_REPLACED 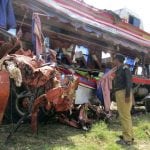 NBC - A passenger bus crashed into an oil tanker in southern Pakistan early Sunday, killing 57 people with remains charred beyond recognition, officials said. Dr. Seemi Jamali, who heads the emergency section at Jinnah Post Graduate Medical Center in Karachi where the remains were brought, said they had received 57 bodies. Four people were also injured, she said. She said the … END_OF_DOCUMENT_TOKEN_TO_BE_REPLACED 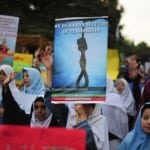 Naiaz Mohammad, 40, was executed today in Pakistan, for attempting to assassinate former military ruler, Pervez Musharraf. A crime he allegedly committed eleven years ago! His body was handed over to the relatives after the execution by hanging. The attack which took place in December 2003, involved a powerful explosion that targeted the former president's motorcade as it was … END_OF_DOCUMENT_TOKEN_TO_BE_REPLACED