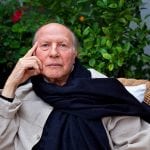 Hungarian Novelist and and the winner of the 2002 Nobel Prize in Literature, Imre Kertesz has died after suffering from Parkinson's disease for several years. He was born on November 9, 1929, Budapest, Hungary and was 14 when he was deported to the Auschwitz concentration camp in German-occupied Poland in June 1944. Hungarian President Janos Ader said Kertesz's life was a … END_OF_DOCUMENT_TOKEN_TO_BE_REPLACED