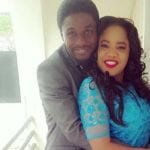 Popular Yoruba actress Toyin Aimakhu, and her husband actor Adeniyi Johnson have separated. Toyin and her husband got married on July 7, 2013 at the Ikoyi Registry. Toyin and Adeniyi has not responded to the allegations so far, all these is not a coincidence as her husband is said to have changed his Facebook status to separated and on the other hand Toyin removed her husband … END_OF_DOCUMENT_TOKEN_TO_BE_REPLACED