If you think Africa is underdeveloped, you better think again. These top 10 most developed cities in Africa will leave you asking “where has the cameras gone to all these while?”. Africa is far developed beyond Masai and Serengeti, far developed beyond ‘National Geo Wild’ cameras. Conflicts, diseases, and poverty are just very tiny part of Africa just like every other nations of the world. The difference is that Western medias and African NGOs overly focused on the continents negativity to create unnecessary sympathy for self gain.

A visit to Africa will change your mindset. In case you want to give it a go, here are the top 10 destinations in Africa you can visit today. These ten most beautiful and most developed cities in Africa is a testament of Western media misinformation about Africa.

Despite the civil wars that ravaged the country for years, creating untold hardship to the people of Cote D’Ivore, this nation especially it’s capital, Abidjan is till one of the most developed cities in Africa with some of the most beautiful skylines you would ever find in Africa.

A visit to Abidjan will leave in owe as to the level of development that has taken place in that region. Ivory Coast is a beautiful place for business and travels in Africa. The country is the largest producer and exporter of cocoa in the world, and the fourth largest exporter of goods, in general, in sub-Saharan Africa (following South Africa, Nigeria and Angola). In 2009, the cocoa bean farmers collectively earned $2.53 billion for cocoa exports.

Kariakoo is said to be the shopping district of the city, and the busiest and probably the largest in East Africa. Many shops, bazaars and merchants are said to dot the streets according to information from Wikipedia, selling a variety of products, from foodstuffs to hardware materials. Dar es Salaam is home to many foreigners from Asia, Europe, India, and America.

The only city in Northern Arabic Africa that made it to this list, largely because of the political and religious unrest (Arab Spring) that has ravaged the region in recent years.

Tunis with it’s 2,700,000 inhabitants is probably the most developed and most organized city in Northern Africa. The wealth and expansion of the Tunisian economy in recent decades is reflected in the booming development of the outer city where according to a report one can see clearly the social challenges brought about by rapid modernization in Tunisia. This modernization is what brought about the development of Tunis to become one of the most developed city in Africa.

Addis Ababa, the capital of Ethiopia is among the cities in Africa that are well developed to certain standard. The roads and buildings are world class which makes it ideal place to establish business in Ethiopia. 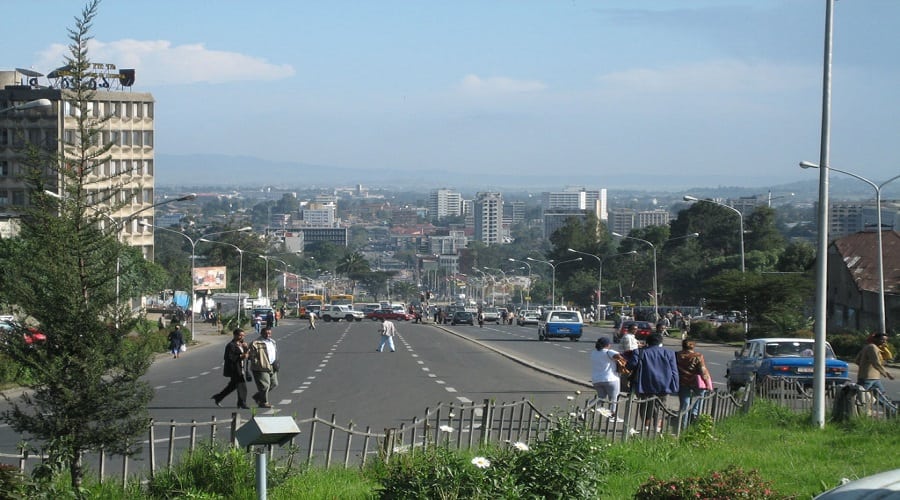 Home to some of the most beautiful women in Africa, Addis Ababa is truly a modern city anyone would like to visit. Though close to Somalia where Al Shabaab terrorist group have been exerting great destructive influences for some years now, Addis Ababa is very peaceful and devoid of terrorist attacks.

Lagos used to be the capital of Nigeria till December 12 1991 when Abuja became the new Federal Capital Territory of Nigeria. Pride itself as the most populous city in Africa, Lagos is the Nigeria and indeed the West African capital of commerce and trade.

Far from the nightmare and notoriety we are made to believe about Lagos of which to a large extent is true, Lagos is probably the most exciting city to visit in Africa. The beauty of the city is not in anyway in doubt as you can see from the picture above, and the nightlife is by far the best in Africa. A beautiful city for business and leisure!

Despite the recent attack on a shopping mall, University hostels, and other places in and outside Nairobi, the city still remain one of the most beautiful city in Africa, a choice destination for the world’s tourists.

Excerpt from Wikipedia: Nairobi is one of the most prominent cities in Africa, both politically and financially. Home to thousands of Kenyan businesses and over 100 major international companies and organisations, including the United Nations Environment Programme (UNEP) and the main coordinating and headquarters for the UN in Africa and Middle East, the United Nations Office at Nairobi (UNON), Nairobi is an established hub for business and culture.

Another beautiful city in the Southern part of Africa. Gaborone, the capital of Botswana enjoys political stability and economic strength, partly because it is one of the largest rough diamond producers in the world. But don’t expect to pick a diamond on the street 😀

Just a visit to Gaborone are hooked for life. So, before you think of visiting, make sure you are prepared for permanent relocation to that city because you wouldn’t let go easily. However, HIV/AIDS remained it’s biggest handicap as quarter of the population (according to Wikipedia) are infected.

The biggest city in South Africa followed by Cape Town, Johannesburg is the second most developed city in Southern Africa with the population of about 1 million.

Although Cape Town takes most of the shine off Johannesburg, it is still one of the finest and choice destination in South Africa. Johannesburg is a well developed city with beautiful attractions such as the City Deep which is the largest dry port in the world and the Apartheid Museum.

Abuja is the most developed city in Western Africa and second most beautiful city in Africa. Beyond it’s beauty and development, Abuja is among the richest city in Africa, not by GDP, but in terms of cash flows.

It is not for nothing that both The New York Times and The Telegraph named Cape Town in 2014 as the best place to visit in the world.

Cape Town has rich European history and was largely developed by it’s European colonial masters. It’s well developed infrastructures in second to none in Africa and among the best in the world.

Highly mobile professionals in big cities can be productive from anywhere with a Virtual Desktop from CloudDesktopOnline.com and online collaboration from CloudAppsPortal.com.