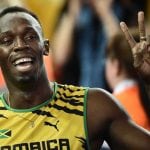 Usain Bolt has set his sights on a winning swansong at the World Athletics Championships in London in 2017. The six-time Olympic sprint champion had suggested that the Games in Rio in 2016 would be his last but he now appears to have changed his mind, with a final competitive visit to the stadium where he won three golds in 2012 on the agenda. "That was the initial plan (to … END_OF_DOCUMENT_TOKEN_TO_BE_REPLACED