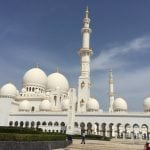 The United Arab Emirates is an Arabian Peninsula country.  It is settled mainly along the Arabian or Persian Gulf.  The country consists of seven federating emirates.  The island capital Abu Dhabi is the home of Sheik Zayed Grand Mosque which is reputed to be capable of seating 40,000 worshippers at a time! Those are all generally known facts.  But there lots of other facts … END_OF_DOCUMENT_TOKEN_TO_BE_REPLACED