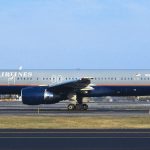 A United Airlines flight was forced by unruly passenger to reverse and land 15 minutes after takeoff. The PLANE was forced to make an unscheduled landing and almost 300 travelers were delayed for 24 hours because of Mr Jeremiah Mathis Thede who suddenly developed unquenchable appetite for nuts and crackers. The United Airlines flight was 15 minutes into its route from … END_OF_DOCUMENT_TOKEN_TO_BE_REPLACED