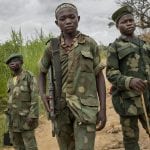 The U.N. children's agency says an armed group in South Sudan has abducted 89 boys in a northern state. UNICEF said in a statement Saturday that the boys, some as young as 13, were abducted near Malakal, the capital of Upper Nile state. The statement said a UNICEF education team reported that the children were abducted while doing their exams in the town of Wau … END_OF_DOCUMENT_TOKEN_TO_BE_REPLACED