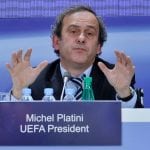 Michel Platini was on re-elected Tuesday as UEFA president, and he then pledged his love for FIFA despite supporting all three candidates opposing Sepp Blatter in the world governing body's own presidential election. Platini ran unopposed to extend his reign, which started in 2007, and was voted in by acclamation by the leaders of UEFA's 54 member federations to serve four … END_OF_DOCUMENT_TOKEN_TO_BE_REPLACED