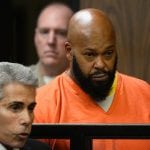 Moments after a Los Angeles judge ruled that Suge Knight be held on $25 million bail stemming from murder charges, the Death Row mogul collapsed in the courthouse. The unconscious Knight was rushed to a jail hospital ward, the Los Angeles Times reports. While Knight has allegedly suffered health problems throughout the pretrial hearings – this incident marked the fourth time … END_OF_DOCUMENT_TOKEN_TO_BE_REPLACED