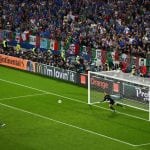 In a EURO 2016 quarter final match played yesterday in Bordeaux, Germany defeated Italy on penalty to reach the semi final in the ongoing 2016 European Championship in France. The match ended 1-1 in the regulation time with Germany scoring in the first half of the match through Mesut Özil while Italy equalized later in the second half through a penalty kick that was awarded for … END_OF_DOCUMENT_TOKEN_TO_BE_REPLACED