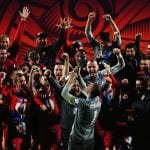 Nemanja Maksimovic scored an 118th-minute goal on the counterattack to give Serbia a 2-1 victory over Brazil in extra time in the Under-20 World Cup final at North Harbour Stadium on Saturday. The game had been locked at 1-1 after 90 minutes, with Stanisa Mandic giving Serbia hope of their first title as an independent nation with 20 minutes remaining but Andreas Pereira … END_OF_DOCUMENT_TOKEN_TO_BE_REPLACED

A Serbian military helicopter evacuating a five-day-old baby for emergency medical treatment has crashed in heavy fog, killing all seven people on board, the officials said Saturday. A four-member crew, two medical workers and the baby were all killed in the crash, Prime Minister Aleksandar Vucic said on public RTS television. The Mi-17 helicopter rushing the baby suffering … END_OF_DOCUMENT_TOKEN_TO_BE_REPLACED