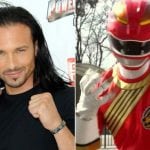 Los Angeles County Sheriff's Department said Ricardo Medina, 36, who played the Red Ranger on Power Rangers Wild Force in 2002 and later played Deker on Power Rangers Samurai, was in custody over the death of Joshua Sutter. Police said Medina and Mr Sutter got into an argument on Saturday afternoon that turned into a fight. Medina retreated to his bedroom with his girlfriend, … END_OF_DOCUMENT_TOKEN_TO_BE_REPLACED