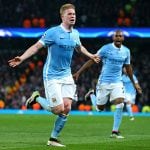 Man City will be thrashing it out with Real Madrid in the 2016 UEFA Champions semi-final. This is the first European Cup semi-final for Manchester City and 27th time for the Real Madrid. The match first leg will take place on the 26th of April and the return leg in Spain's capital on 4th May. "It's a semi final so it's going to be a very very difficult game said Zinédine … END_OF_DOCUMENT_TOKEN_TO_BE_REPLACED 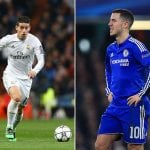 Real Madrid and Chelsea could be set to swap their two players James Rodriguez for Eden Hazard. James and Eden has failed to live up to the expectation of their clubs manager desires. James joined Real Madrid in 2014 for £63 million after his wonderful performance at the 2014 World Cup in Brazil. Eden who joined Chelsea in 2012 for £34 million hasn't had the greatest season … END_OF_DOCUMENT_TOKEN_TO_BE_REPLACED 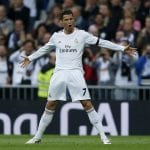 Cristiano Ronaldo, fired up by his rival Lionel Messi’s midweek hat-trick for Barcelona, struck four goals in the second-half of the game as Real Madrid crushed Celta Vigo 7-1 at the Bernabéu, he became the third player in Spain to break 250 league goals only Athletic Bilbao striker Telmo Zarra – who scored 251 goals in the forties and fifties – and Leo Messi – who currently … END_OF_DOCUMENT_TOKEN_TO_BE_REPLACED 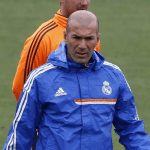 Real Madrid coach Zinedine Zidane still believes that the La Liga title race is not yet over for Real Madrid. Madrid are nine points behind Barcelona in the title race with 13 games still to play, having drawn two of their three away games. Zidane told his postmatch news conference that the title was not out of reach. "You might think La Liga is over but I do not, and the … END_OF_DOCUMENT_TOKEN_TO_BE_REPLACED 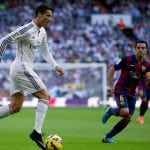 A new Spanish law governing the sale of television rights to broadcast football matches and the distribution of the income, was approved by the government on Thursday. The law will regulate the rights to transmit first and second division games as well as the Copa del Rey and Super Cup competitions, the sports minister, José Ignacio Wert said. The legislation will come into … END_OF_DOCUMENT_TOKEN_TO_BE_REPLACED 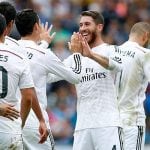 Champion Real Madrid have ended  their 22 winning streak to Valencia  after returning from winter break The defeat come days after they travelled to Dubai for a money-making friendly with AC Milan, a Match they lost to Milan by 4-2 Madrid prior to this game have won 22 matches in all competitions to set a new Spanish record but they lacked both quality and intensity at … END_OF_DOCUMENT_TOKEN_TO_BE_REPLACED