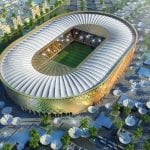 After four years of intense controversy and debate in the wake of the 2010 vote to award the tournament to Qatar, a Fifa taskforce decided last month the tournament should start in November to avoid searing summer temperatures which regularly top 50C (122F). The 2022 World Cup final in Qatar will take place on 18 December, Fifa has confirmed, allowing the English domestic … END_OF_DOCUMENT_TOKEN_TO_BE_REPLACED