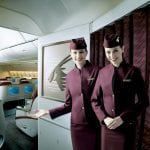 The chief of Qatar Airways, Akbar al-Baker, has furiously denied claims that its flight attendants are sacked if they get married. Baker told CNN that the claims were untrue and his company's employment practices were "very progressive". Asked if staff are fired when they get married, Baker said: "That is not true. That is a load of bullshit." The claims were first made by … END_OF_DOCUMENT_TOKEN_TO_BE_REPLACED