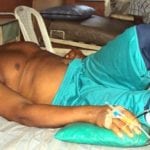 There are reports going around social media that Nollywood actor prince James Uche is suffering from kidney disease and was neglected by the AGN. Reacting to the issue via a press statement issued by AGN National President on Tuesday, Ibinabo Fiberesima, and made available to Nigeriafilms.com, it was stressed that the actor was never abandoned as claimed in some sections of … END_OF_DOCUMENT_TOKEN_TO_BE_REPLACED