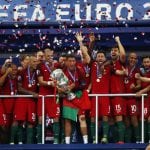 There is nothing wrong with a game that doesn't have a lot of goals. It doesn't mean that it wasn't entertaining. Portugal were not supposed to make the final before they struggled in the group stage. Yes, they have consistently been contenders the last decade, but they have not been favorites. But this final, Portugal played amazing considering they didn't have Ronaldo. For … END_OF_DOCUMENT_TOKEN_TO_BE_REPLACED