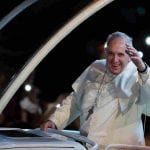 MANILA, Philippines (AP) — A record 6 million people poured into Manila's rain-soaked streets and its biggest park Sunday as Pope Francis ended his Asian pilgrimage with an appeal for Filipinos to protect their young from sin and vice so they can instead become missionaries of the faith. The crowd estimate included people who attended the pope's final Mass in Rizal Park and … END_OF_DOCUMENT_TOKEN_TO_BE_REPLACED