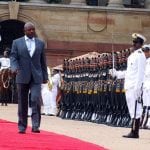 (Bosco Mutarambirwa -  New Jersy) - Pierre Nkurunziza is flying back to Burundi: Let the party start Will Nkurunziza get shot in mid-air like Habyarimana and Ntaryamira? Unlike Paul Kagame who is feared by his people, Pierre Nkurunziza is popular. The majority of Burundians love him. This is undeniable. Only way to easily get rid of Nkurunziza is kill him - like Ndadaye or … END_OF_DOCUMENT_TOKEN_TO_BE_REPLACED 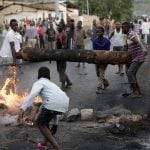 Bujumbura - At least ten persons have been killed and twelve wounded in Burundi on Thursday in a fresh outbreak of clashes between demonstrators and police, eyewitnesses said. A small group of protesters clashed with government supporters, thought to be members of the ruling party's militia, in the Kinama district of the capital Bujumbura. Police opened fire on the … END_OF_DOCUMENT_TOKEN_TO_BE_REPLACED