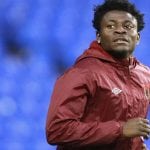 Obafemi Martins has moved from Seattle Sounders to join Chinese club Shanghai Shenhua football club. According to BBC report the transfer deal worth several million dollar. Martins was linked with a move back to the Premier League in the January window, but British agent Tony Harris along with the player's attorney Soroosh Abdi brokered the deal taking the Super Eagle to … END_OF_DOCUMENT_TOKEN_TO_BE_REPLACED 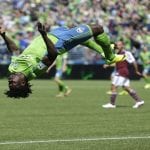 By Jim Itoro - Anybody can become anything in life. I grew up some years back to see myself and family in a rented apartment built by Mr Martins in Lagos, the father of Obafemi Martins. He had about 7 children and Akinwunmi was the last male and attended Coker secondary school, I could vividly recall interacting and playing football with him in the compound,not once or … END_OF_DOCUMENT_TOKEN_TO_BE_REPLACED