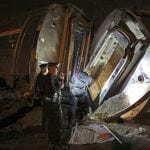 At least five people were killed and dozens injured when an Amtrak train headed to New York City from Washington derailed in Philadelphia last night, with up to 10 cars rolling over. Amtrak said the train was carrying 238 passengers and five crew members. The cause of the crash was not immediately known. According to eyewitnesses who were on board the train that derailed … END_OF_DOCUMENT_TOKEN_TO_BE_REPLACED