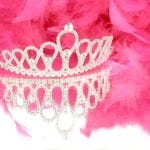 Miss Stephanie Del Valle representing her country Puerto Rico, in the Miss World 2016 has won the top prize in the 66th edition of the pageant. The competition which has been on for more than three weeks now with 117 contestants was finalized on Sunday, 19th December, 2016 at the MGM National Harbor in Oxon Hill, Maryland. The event was hosted by Miss World 2013 Megan Young … END_OF_DOCUMENT_TOKEN_TO_BE_REPLACED