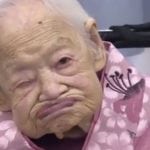 The oldest woman in the world, Japan's Misao Okawa, celebrated her birthday today. the 117-year-old insists living this long is really no big deal. Born on 5 th March 1898 in Tenma, she has previously said the key to a long life is eating sushi and getting at least eight hours sleep a night. Mrs Okawa took the title of world’s oldest living person in June 2013 following the … END_OF_DOCUMENT_TOKEN_TO_BE_REPLACED