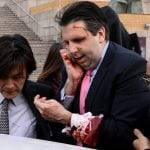 SEOUL (Reuters) - The U.S. ambassador to South Korea said on Tuesday he plans to maintain his open, approachable style despite being slashed by a knife-wielding Korean nationalist five days ago, causing him wounds that required 80 stitches in his face. Lippert had quickly become known for his informal demeanor since becoming ambassador in November but last week's attack raised … END_OF_DOCUMENT_TOKEN_TO_BE_REPLACED