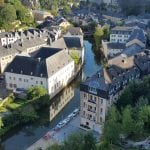 There are some amazing facts about Luxembourg you would like to know. Luxembourg is one of the smallest countries of the world.  It has a land area of 2,586.4 km2.  And according to UN in 2011, Luxembourg has a population of 516,000. It is a land-locked country in central Europe, with Luxembourgish, German, and French as official languages.  The small country operates a … END_OF_DOCUMENT_TOKEN_TO_BE_REPLACED