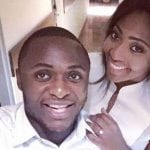 In a chat with Saturday Beats earlier in the week, Ubi Franklin, who confirmed he was engaged to Lillian, said he didn’t know the babe was an actress when he asked her out. He said, “When I met her, I did not even know she was an actress. That is something people do not know. I hardly watch television these days because of my schedule, so there are a lot of movie stars I do … END_OF_DOCUMENT_TOKEN_TO_BE_REPLACED