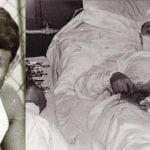 Rogozov realized he had a choice between death or saving himself. “MY heart seized up and noticeably slowed; my hands felt like rubber” this is how Leonid Rogozov described the sensation of removing his own appendix in a diary entry written after his extraordinary feat. The Russian surgeon was forced to operate on himself during an Antarctic mission in which he was stuck at a … END_OF_DOCUMENT_TOKEN_TO_BE_REPLACED