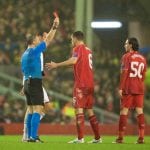 Liverpool winger Lazar Markovic has been suspended for their next four European matches following his Champions League sending-off against Basel in December. Liverpool opted not to appeal UEFA's decision and Markovic will miss both legs of the last-32 Europa League clash against Besiktas, the first of which is at Anfield on Thursday, as well as the home and away last-16 … END_OF_DOCUMENT_TOKEN_TO_BE_REPLACED