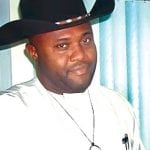 Chief Dan Nwanyanwu has tendered his resignation as Chairman, Board of Trustees and member of the Labour Party on Monday. In an open letter issued to the National Chairman of Labour Party, Chief Abdulkadir Salam, Nwanyanwu stated that his resignation was based on the irregularities in the party’s activities which “are not in consonance with the integrity, transparency and … END_OF_DOCUMENT_TOKEN_TO_BE_REPLACED