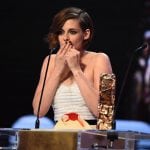 Kristen Stewart is the first America to win the French Oscar, she’s the Jerry Lewis of her generation. Stewart, 24, snagged the Best Supporting Actress César for her role in “Clouds of Sils Maria,” a character study about an aging actress. French film star Juliette Binoche played the movie’s lead role. Stewart starred as her assistant. Stewart had no trouble with her lines in … END_OF_DOCUMENT_TOKEN_TO_BE_REPLACED