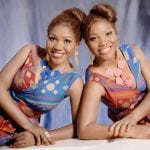 Kehinde Oshadipe has released a tribute song for her late twin sister Taiwo Oshadipe.titled the track:`My Reflection’. The music was produced by Ace producer, Wole Oni, she said the music describes Taiwo as her reflection indeed, the only close friend she had known all her life and someone who was always sincerely validating or debunking her choices. She said Taiwo showed … END_OF_DOCUMENT_TOKEN_TO_BE_REPLACED