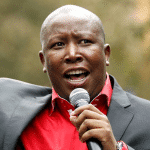 Commander in Chief of the  Economic Freedom Fighters (EFF) Julius Malema has launched a blistering attack on Nigerian President Goodluck Jonathan over his silence on recent Boko Haram attacks in the town of Baga. Malema was Addressing journalists in Johannesburg, where he described Jonathan as an "irresponsible" leader and urged the South African government to intervene and … END_OF_DOCUMENT_TOKEN_TO_BE_REPLACED