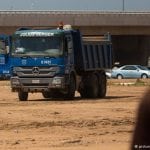 Two persons has been charged with the murder of a German Julius Berger worker. A Magistrate's Court in Abeokuta, Ogun state Nigeria, on Wednesday remanded two persons in prison over the alleged murder of a German expatriate and kidnap of another German. The two, Ibrahim, 33, and Saidu Muhammed, 30, were accused of conspiring and causing the death of Frank Sieberg in attempt to … END_OF_DOCUMENT_TOKEN_TO_BE_REPLACED