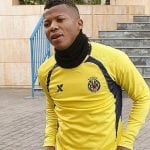 Nigerian striker Ikechukwu Uche has announced an agreement to play for Mexican club Tigres UANL in a three-year deal. Uche, 31, announced via his official Twitter account that he had reached an agreement to play with the Liga MX side. Tigres are three-time champions of the Mexican top division and are looking to strengthen their attack as they hope to challenge for the league … END_OF_DOCUMENT_TOKEN_TO_BE_REPLACED