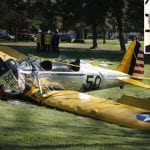 Hollywood actor Harrison Ford plane crash land on Thursday after his vintage World War II training plane lost engine power and crash-landed at an L.A. golf course. The 72 year-old actor, who was conscious and breathing when rescue crews reached him, was stabilized and taken to a hospital, where he was in fair to moderate condition, authorities said. Sources familiar with the … END_OF_DOCUMENT_TOKEN_TO_BE_REPLACED