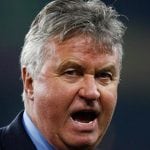 The owner of the football club Mr. Abramovich, has appionted Guus Hiddick to be the next coach for Chelsea football club. This happaned due to the under performance of Jose Mourinho, which led to his sack. On the verge of living the club Jose Mourinho said he was pleased to have retured to the club (Chelsea), winning him eight titles for the club, He later thanked his fans for … END_OF_DOCUMENT_TOKEN_TO_BE_REPLACED