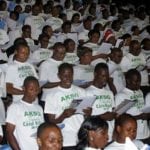 A Nigerian choral group based in Akwa Ibom State has broken the world record for the largest number of Christmas carol singers in the world. Guinness World Records have officially certify the record was broken by the Godswill Akpabio Unity Choir, a 25,272 man-choral group, in a concert in the Uyo Township Stadium on Saturday, December 13, 2014 with Guinness World Records … END_OF_DOCUMENT_TOKEN_TO_BE_REPLACED