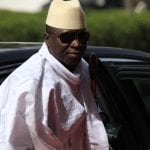 The president of the tiny African nation of The Gambia has reportedly threatened to kill any homo$exuals in his country, adding to his long-time record of cracking down on homo$exuality. "If you do it [in The Gambia] I will slit your throat," President Yahya Jammeh said in a public speech in the Wolof language, cited by VICE News. "If you are a man and want to marry another … END_OF_DOCUMENT_TOKEN_TO_BE_REPLACED 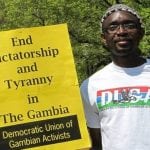 Four officers suspected to be among of the heavily armed group who attacked the presidential palace in the Gambian capital Bangul before dawn on Tuesday, have taken refuge in Guinea-Bissau. according to a military source in the west African country. The four suspects arrived Bissau Wednesday and turned themselves in to the authorities. The group who attacked the presidential … END_OF_DOCUMENT_TOKEN_TO_BE_REPLACED