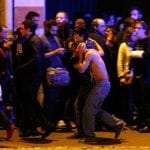 Facebook has come under heavy criticism for rolling out their safety check app for Paris attack when they had not done so after the similar attack in Beirut and Baghdad and even Nigeria. More than four million people used the Facebook Safety Check tool to tell their friends they were OK, and over 360 million people got notifications that their friends were safe, according to … END_OF_DOCUMENT_TOKEN_TO_BE_REPLACED