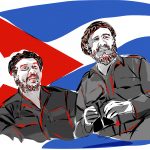 Fidel Castro was a Cuban politician, dictator, and revolutionary. He was born on August 13, 1926 and died yesterday, November 25, 2016. He had been in poor health since an intestinal bleeding that nearly killed him in 2006. His younger brother President Raul Castro said on state television that his older brother died at 10:29 p.m. Friday in Havana. He ended the announcement by … END_OF_DOCUMENT_TOKEN_TO_BE_REPLACED