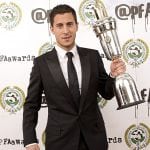 Eden Hazard has been named the Professional Footballers’ Association player of the year for 2014-15, recognising a season of performances that have helped bring Chelsea to the verge of the Premier League title. The 24-year-old, who won the young player of the year award last year and has built on that achievement with some impeccable displays this time around, took the prize … END_OF_DOCUMENT_TOKEN_TO_BE_REPLACED 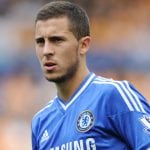 Chelsea winger Eden Hazard has signed a new five-and-a-half year contract to keep him at Stamford Bridge until 2020. The Belgium international has been in talks with the Blues over a new contract for several months and reports in recent days suggested an announcement was close. Blues boss Jose Mourinho joked this week that the delay had been caused by the need for him to go … END_OF_DOCUMENT_TOKEN_TO_BE_REPLACED