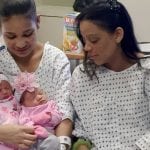 Two sisters gave birth to baby girls 15 minutes apart on January 6, 2015. The young women are from the Dominican Republic and speak no English. When they spoke to ABC News through an interpreter, they described a chaotic scene where older sister, Yely Gonzalez, began having contractions and brought her younger sister to the hospital for moral support. Estafany Gonzalez wasn't … END_OF_DOCUMENT_TOKEN_TO_BE_REPLACED