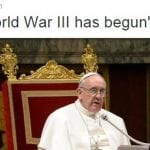 The Twitter accounts of the New York Post and Press International (UPI) has fallen victim to hackers with fake tweets on economic and military news posted on it. For instance, on one of the posts, the Pope was quoted as saying that the "World War III has begun". the fake stories continued; that hostilities had broken out between the US and China. This is the latest hack of a … END_OF_DOCUMENT_TOKEN_TO_BE_REPLACED