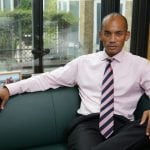 Chuka Umunna, has confirmed he will be standing for the Labour leadership, saying he will have no truck with those who say the party faces 10 years out of office. Umunna travelled to Swindon, where the party failed to win two key seats, to make his announcement on his Facebook page. He said he had spoken to half of the Labour candidates who had been defeated in the party’s 80 … END_OF_DOCUMENT_TOKEN_TO_BE_REPLACED