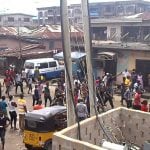 Another member of the Indigenous People of Biafran (IPOB) was shot dead by Nigerian military men on Monday 18th of January 2016, on St. Micheal’s Road, Aba, Abia state. An eyewitness told NAN that Chidozie was returning to the shop where he was learning a trade after having his lunch at a food kiosk on St. Michael’s road by York when tragedy struck. According to him, the … END_OF_DOCUMENT_TOKEN_TO_BE_REPLACED 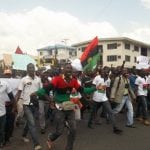 The situation in Onitsha is far from abating as the pro-biafran protesters are busy causing all sorts of chaos in the state for the government to release their detained leader, Nnamdi Kanu. The protesters are also agitating for freedom as a nation. The eastern gateway, River Niger was blocked for hours with no one allowed to enter or get out of the state by the Biafra … END_OF_DOCUMENT_TOKEN_TO_BE_REPLACED 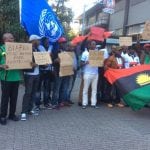 The Buhari Media Support Group (BMSG), have released a statement in Abuja on Tuesday. In the statement they urged for dialogue between the agitators for the Actualization of the Sovereign State of Biafra (MASSOB) and the Federal Government. The reason for the dialogue is for pro- Biafra agitators MASSOB and IPOB, to state their grievances to the Federal Government. The … END_OF_DOCUMENT_TOKEN_TO_BE_REPLACED 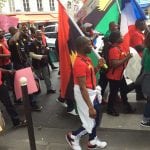 Where exactly is called Biafra? The Eastern Region, a former federal division of Nigeria with capital Enugu, became a secessionist state called Republic of Biafra after gaining independence from Nigeria in 1967. It was re-annexed in 1970 following the Nigerian-Biafran war that claimed one million lives. But the struggle seems to be far from over. Over the past weeks, there … END_OF_DOCUMENT_TOKEN_TO_BE_REPLACED