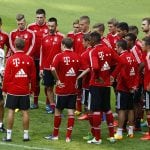 Bayern Munich have extended their kit deal with Adidas until 2030 for a reported €900m (£645m). The contract had another five years to go but the German kit manufacturer moved early to secure a further 10 years with the newly crowned Bundesliga champions. “With this extension of the contract until 2030 Adidas will continue its long partnership with FC Bayern München,” said … END_OF_DOCUMENT_TOKEN_TO_BE_REPLACED

Bayern Munich won a third straight Bundesliga title after Wolfsburg lost at Borussia Mönchengladbach on Sunday to leave the champions with an unassailable 15-point lead with four games left. Bayern, who have won 25 German league titles including one before the Bundesliga’s creation in 1963, beat Hertha Berlin 1-0 on Saturday but had to put the champagne on ice until after … END_OF_DOCUMENT_TOKEN_TO_BE_REPLACED