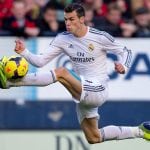 Real Madrid players Gareth Bale and Jesé Rodríguez were reportedly attacked by their own fans outside the club’s training base, following the 2-1 clásico defeat to Barcelona. After the team arrived back in Madrid on Sunday night, two fans repeatedly struck the cars of the two wingers after they refused to stop their vehicles to speak to the supporters outside the Valdebebas … END_OF_DOCUMENT_TOKEN_TO_BE_REPLACED